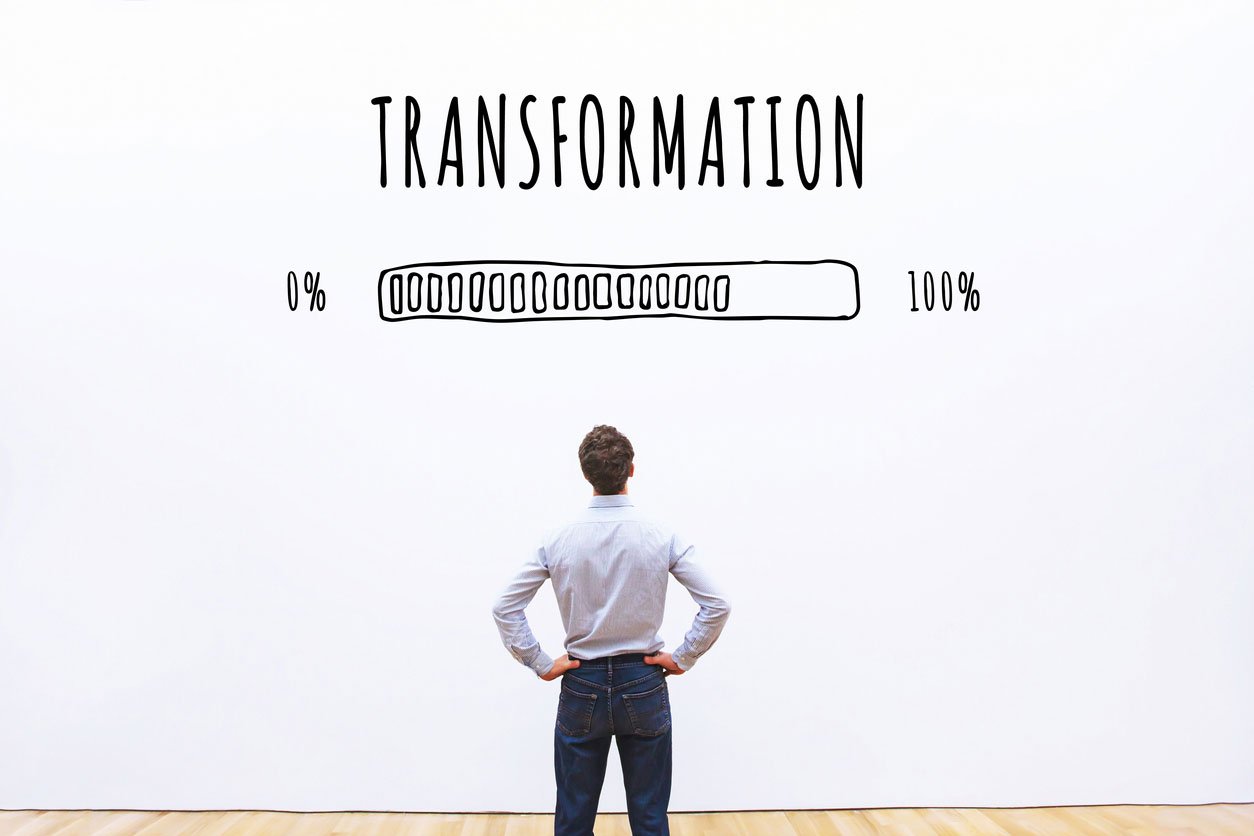 The word “transformation” can be a bit of a buzzword. Like so many good words, it can be co- opted by empty sloganeers. Merriam-Webster dictionary even has a definition of transformation that refers to “false hair.” Who knows?  Perhaps an example of “a complete or dramatic change in the appearance, form, or character of.”

To transform means so much more than to change. I can change my clothes, my job, or an onboarding process.  Transformation is defined by the degree of change, not merely its presence.  Transformation is a profound shift, a metamorphosis – fundamentally different than before.

It follows that a transformational leader enables profound shifts.

Like Steve Jobs.  No doubt, his leadership helped to transform many industries: personal computing, animated movies, music, phones, tablet computing, and retail stores.  Industries that are fundamentally different than before.

As a leader, Jobs was famously impatient, petulant, and tough with the people around him.  He was known to be temperamental, abrasive, subject to extreme emotionalism and binary about his assessment of people – “brilliant or shit.” When he returned to Apple in the late 1990s, he “terrorized” many employees with summary firings if he didn't like the answers they gave when questioned.

Biographer Walter Isaacson asked Jobs about his tendency to be rough on people, he replied “look at the results.”  We have come to accept the “rough edges” of visionary leaders to be a necessary trade-off for their transformational impact on industries and consumer lives.

The “ends justify the means.”

According to Walter Isaacson’s biography, as early as 1997 Steve Jobs’ goal was to build an enduring company that prioritized people.  The man consistently described as rough on people seemed to believe in these theoretical principles of transformational leadership, characterized by academics for decades.

To transform industries AND people.

That is the thing about this vision of transformational leadership – it is much easier in principle than practice.  And as a result – it is at risk of being theoretical, but not practical.

This type of transformational leadership, what I call game-changing strategic leadership, is rare.

It is characterized by leaders that skillfully demonstrate the intertwined DNA strands of strategic leadership:

Only about 5% of the population practice this level of leadership with consistency.  Leaders like Herb Kelleher (Southwest), Indra Nooyi (Pepsi) and Alan Jope (Unilever). These are bold, visionary, decisive leaders who, by many accounts, do not leave others feeling dismissed, dis-regarded or dis-respected.

Let me be clear – these leaders are not perfect.  They are human, after all - we are all subject to bad days.  When the stress over-takes, we are triggered, flooded with emotion and reduced to fight, flight or freeze responses.  And the demands of this type of leadership are extra-ordinary.

Undoubtedly these role-model leaders have left people feeling like their voice wasn’t heard, understood or respected.  Upon reflection, these leaders likely realized that they ‘lost their cool’ and weren’t leading as effectively as they could, or in as inclusive a way as the situation allowed.

The difference between these leaders and our ‘1.0 Transformational Leaders’ is: commitment and frequency.

These leaders didn’t subscribe to the “ends justify the means” argument.  They believe a different means (aka leadership approach) will produce an even better end.  They are committed to transforming people as much as industries, starting with themselves.  As a result, the days or moments when they aren’t leading as their most resourceful self are the exception not the norm.

Why Is Transformational Leadership so Hard?

Transformational leadership is inherently risky. It involves risks, not only at the business level, but at the human level. The risk of incompetence, rejection, failure.

To be credible (aka right)

We must build the capacity and resilience to effectively:

Building emotional intelligence is essential.  Because when there is risk and uncertainty, our reactive self is bound to be at play.  Especially when we haven’t learned to recognize it or manage it.

For years, Job’s was subject to his extreme emotionalism.  And as a result, he struggled to align his actions with his belief that people are basically good and smart.

The strength of his convictions, often touted as the driver behind his ability to transform our lives, was also an obstacle to Job becoming a ‘2.0 Transformational Leader’.  When you are sure you can see things that others can’t, it is easy to dismiss alternate perspectives.  Too many leaders are so sure of themselves that they reject worthy opinions and ideas from others and refuse to abandon their own bad ones.  Strong conviction, but no connection to the ideas or perspectives of others.

The Biggest Risk of Transformational Leadership?

The biggest risk, sometimes, is the internal one you take when you are willing to look hard at yourself, your habits, tendencies, and impact. Leadership is all about change. Many a ‘1.0 Transformational Leader’ has transformed their corner of the world, regardless of the scale of impact.  Yet the one change they can’t envision — or believe is possible — is the one within themselves.

I don’t think true transformational leadership happens without this internal work. For Jobs to lead consistent with his belief, a personal transformation from the inside out was required.  ‘2.0 Transformational Leadership’ becomes possible when we build our capacity to lead with a balance of conviction AND connection to those we lead.

Jobs became a role model of conviction and connection.  Guy Kawasaki, former chief evangelist at Apple, said one of the most important lessons he learned from Jobs “is that changing your mind, changing what you’re doing and reversing yourself as an extreme sign of intelligence.”  The reality is that much of Apple’s success came from his team’s ability to challenge Job’s thinking.

Jobs’ transformation gives reason to believe that no matter what kind of leader you are now, transforming yourself and your organization is possible.

As an executive coach, I know it is. I have the honor of partnering with leaders on this journey each day:

Is An Unconscious Need for Safety Getting in Your ...

Trapped by the Need for Emotional Safety It’s early 2000s. I was VP Strategy and Business Development for a $1B Division of a life sciences ...

My strategy engagements often start with interview feedback like the following: “We are doing too much.” “We need to focus.” “We need to dec...

Let’s Dig In and Explore the Strategic Competencie...

What does it take to be a strategic leader? Strategic leadership isn't easy. Statistics show that fewer than 10% of leaders exhibit key stra...

Tap into Your Full Intelligence to Be a More Effec...

Dylan returned to his office, deflated after another frustrating meeting with his colleague. Dylan is a recognized strategist with a clear v...

Everything you need to start creating your pillar page flows today.